HRLHA Press Release
November 20, 2016 The March 2014 Oromo student protests, which began at Jima University and spread quickly to Ambo University then in a few days to all universities, colleges, high schools and elementary schools in Oromia and continued for two months, captured the attention of the world community for the first time. In those two months, over 81 Oromos, mostly university students, were killed and thousands detained by the crackdown on the protest by Agazi force and silenced. After eighteen months, the protest flared up again on November 12, 2015 in Ginchi Town in Western Showa 80 km south of the capital city. Since then, Oromia has remained in a human rights and humanitarian crisis. The Human Rights League of the Horn of Africa (HRLHA) lists over 2000 Oromo deaths, thousands of disappearances and tens of thousands of detentions. Many more thousands have left their homes behind and are now living in forests in order to escape the TPLF sponsored killing squads. To calm the peoples’ anger- after indiscriminate shootings from both the ground and the air of innocent Oromos at the Irrecha festival in Bishoftu on October 2, 2016- the government declared a state of emergency on October 8, 2016repression-in-ethiopia

Posted by Oromo firee speech at 5:02 PM No comments:

Ethiopia’s Declaration of State of Emergency on Oromia is an equivalent of Derg’s “Red Terror.”: Here is why.

By Leelloo Sabaa, October 20, 2016
In Ethiopian Empires’ political history, the year 1977-78 is remembered as the year when Mangistu Haile Mariam’s political power   was absolutely threatened and his rul

Haile-mariam Desalegn
By all means at our disposal, lets sharpen its capability and strength over the enemy whose dream is only to eradicate us from our God given and blessed country, The Republic of Oromia. Let’s rise up and stop this enemy from achieving its dream of finishing Oromians and  bring them to the court of free Oromia. We have to redouble our effort more than ever before. We have to mobilize all our savings and wealth for our survival through The Oromo Liberation Front.We have to witness the day Haile Mariam Dessalegn and his god fathers face justice in our life time.  Lets give Ethiopian colonial rule in Oromia the last blow. Lets show to our enemy the miracle of the power of Oromians. Lets defeat this enemy and freely exercise our right to self determination for Oromia through free and internationaly observed referendum.Lets realize :free, united, peaceful, prosperous and happy life the pioneers of the struggle for Oromian independence envisaged for Oromians.
By our blood we shall defend ourselves!
The bickering is the flood gate of the enemies!
Victory to the Oromoo People!
Posted by Oromo firee speech at 11:14 AM No comments:

Ethiopia – A Human Catastrophe is Looming in Ethiopia

Posted by Oromo firee speech at 8:00 AM No comments: 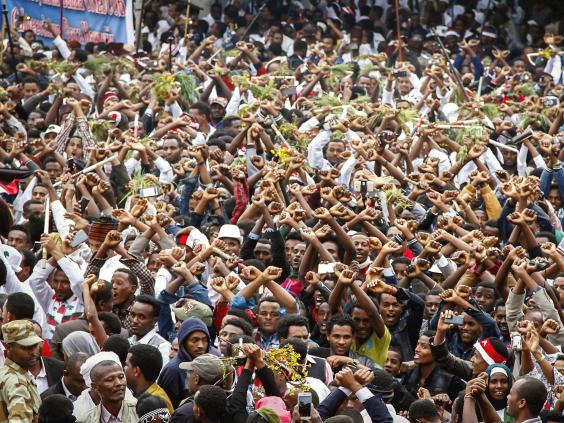 Protesters chant slogans against the government during a march in Bishoftu, in the Oromia region of Ethiopia (AP)
The government says diplomats are not allowed to travel more than 40km (25 miles) from the capital, Addis Ababa, without permission, and say it is for their own safety.
But the rights group Reprieve told The Independent there are serious concerns this could limit the access Britons have to consular services. They raised the case of one UK citizen,father-of-three Andy Tsege, who is on Ethiopia’s death row and held at a jail some way outside the capital.
“Andy’s family in London, who cannot contact him, are sick with worry,” said Maya Foa, a director at Reprieve. “Amid this crisis, it’s shocking that the UK continues to rely on Ethiopia’s vague, broken promises of regular consular access and a lawyer for Andy. Boris Johnson must urgently call for Andy to be returned home to his partner and kids in Britain.”
Ethiopia is a key strategic ally for the US and European countries in the fight against Somalia’s Islamist insurgency, al-Shabaab, and Addis Ababa is the home of the African Union.
The global importance of the country’s stability has meant Western governments turning a blind eye to its authoritarian leadership. In June, the ruling Ethiopian People’s Revolutionary Democratic Front cut off nationwide access to social media – on the grounds of preventing exam result leaks.
The new ban on internet services has already made a noticeable impact on the flow of reports of unrest coming out of the country via on-the-ground activists.
Ethiopian state media reported that 1,000 protesters had been arrested in the central Oromia town of Sebeta since the state of emergency was declared on 8 October, and ahead of an investment conference in the town which began on Monday. 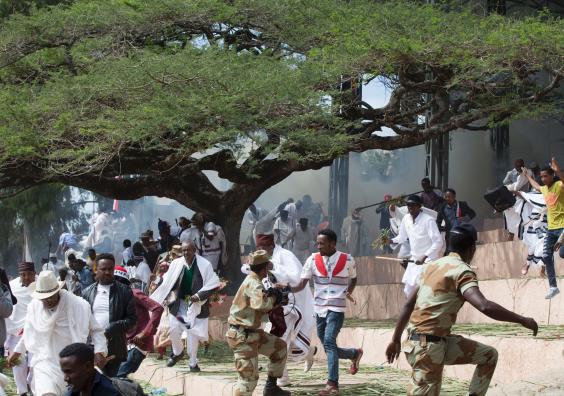 Festival goers flee during a deadly stampede in Bishoftu, on October 2, 2016 (AFP/Getty Images)
FBC said those detained were suspected of damaging property, but there was little in the way of opposition reports to give the other side of the story.
The emergency rules include a ban on using social media to contact “outside forces”, and Ethiopians risk jail if they communicate with any “anti-peace groups designated as terrorist”.
Finally, the rules stipulate a curfew of 6pm to 6am in which members of the public may not visit factories, farms and government institutions, which have come under attack in recent weeks.
The UN Secretary-General Ban Ki-moon has urged the Ethiopian government to ensure “the protection of fundamental human rights” during the state of emergency, and the president has announced some electoral reforms in order to try and reach out to protesters.
A Western diplomat told the AFP news agency those changes had not yet materialised, however. “This is a state of emergency and we expect repressive measures,” the diplomat said.
“But we also expect an opening of the political space for the opposition as stated by the president in front of the parliament. This is not what seems to be happening.

Posted by Oromo firee speech at 8:24 AM No comments:

August 24, 2016 in Oromia, Sports
The Ethiopian government is in preparation to force these and other athletes to condemn marathon runner Feyisa Lilesa on public TV for his so called treason in Rio 2016. This act amounts to another human rights violation against the will of these young athletes. The world must carefully watch the behavior of this regime of the jungle.

The aims of the Oromo struggle led by the OLF is to realize the Oromo people’s selfdetermination right; to dismantle colonial system from Oromia and to free Oromo from subjugation and to establish free Oromia state. This can be achieved through the sole decision of the Oromo people who will choose either to establish a free Republic of Oromia or to make new political arrangement with neighboring nationalities based on interest, equality, mutual respect and democratic values and principles. This means that the OLF struggles to make an arrangement for Oromo people for free referendum rights.
The Oromo people has struggled and made huge scarifies to fulfill the aims and objectives of the Oromo struggle set out by the OLF. When the Oromo elites and committed individuals developed the OLF program, the central aim was to solve the fundamental political problem of the Ethiopian empire from its roots. The program was not only based on the interest of Oromo people but also considered the interests of other peoples in the Ethiopian empire who were colonized in a similar way and benefit from this struggle.
Thanks to Oromo heroes and heroines, today the Oromo people liberation struggle has reached the stage where every Oromo has gained a full confidence to achieve its long awaited freedom. Also millions of Oromo heroes and heroines are ready to sacrifice their lives for freedom until
the liberation of Oromia is realized. We have no doubt that with the sacrifices of committed Oromo heroes and heroines, the OLF vision, which is also the vision of vast Oromo people, will be achieved. However, we cannot deny that there are internal and external forces that want to give the Oromo liberation movement a blind eye and want to divert the Oromo genuine questions for their own political agenda and strategic interest.
Posted by Oromo firee speech at 8:01 AM No comments:

Posted by Oromo firee speech at 10:54 AM No comments:

June 26, 2016 in Oromia, World
Dear All,
Art, language, history, and culture are what make one nation unique. Oromia produced many hero Artists who contributed so much not only for the development of Oromo arts, language, history, and culture but also for the struggle of Oromo people for liberation from over century colonizers. If someone asks the names, artist Zarihun Wadajo or Diddaa in Afaan Oromo roughly translated meaning in English as Resistant, Strong or Tough is one of the finest Oromo Artists still alive and working hard day and night to promote Oromo People’s right and see liberated Oromia.
Zarihun Wadajo came to the U.S.A few months ago. It was a dream came true for many Oromo in Diaspora when they heard about his arrival in USA. He performed amazing events in different states since his arrival and has a plan to reach out to thousands of Oromo in diaspora who missed him for long time.
Most of you are aware of the life situation he passed through, but you can refresh your memories from social medias.
Currently, Zarihun Wadajo’s health and life condition is deteriorating. The situation becomes worse if immediate action will not be taken. He needs Urgent Medical Attention and he needs support from Oromo people for whom he sacrificed his entire life for their freedom. As many know, he has been imprisoned, tortured and even feared to death several times under the previous two regimes. Especially, he suffered a lot under the current TPLF government for his resistance and commitment to Oromo people in his country.
Watch some of his famous music:
1. Legendary Artist Zarihun 1
2. Legendary Artist Zerihun 2
3. Legendary Artist Zerihun 3
4. Legendary Artist Zarihuun Wadajoo 4
This hero Oromo son appeals to All Oromo for their support to cover his medical costs as you can hear from his own WORDS :
Support Legendary Artist Zarihun Wadajoo.
Zarihun Wadajo Worked hard his entire life to Uphold Oromo People through his music and setting himself as an example in multi directions. Especially his contributions for Oromo struggle for freedom is unforgettable.
Once upon a time, the late Primer of Ethiopia, Males Zenawi witnessed Zarihun Wadajo as a capable and better individual than Oromo Generals in Woyane camp. Many of his witnesses from the current rulers are coming soon.
Now, this legendary in turn needs Uphold from us during this critical situation and it is time to support him.
The Washington DC Metropolitan Area Support for Legendary Artist Zarihun Wadajo
Organizing Committee has created an online GoFundMe account under his name to generate funds from Oromo People living in different part of the world so that they can donate by visiting: GOFUNDME link:
https://www.gofundme.com/2ahedczg
Or
You can directly deposit into his personal bank account (Zerihun W. Gobena) at:
Account Number: 4460 3672 3067 (Saving)
ACH Routing Number: 052001633 (Bank of America Bank)
The committee is also organizing a fundraising event on Saturday, July 16, 2016 at Washington Ethical Society, located at:
7750 16th St. NW
Washington, DC 20012
Time: 4:30-12:00 AM.
Therefore, you are invited to support our legendary, Zarihun Wadajo, in any way you can by donating either online or by visiting the local fundraising event.
We hope that he will fully recover from his current illness and be back to his stage soon to fulfill his dreams.
Thank you in advance for your support for our legendary.
Best regards,
Posted by Oromo firee speech at 12:39 PM No comments: