Kenyan President Uhuru Kenyatta said 39 people had been killed, including members of his family, and 150 injured.
The operation to secure the mall and catch the gunmen was ongoing, he said in a national TV address. |
Al-Shabab, which has links to al-Qaeda, said the attack was in response to Kenya’s presence in Somalia.
There are about 4,000 Kenyan troops in southern Somalia, where they have been fighting the militants since 2011.

Frank GardnerBBC security correspondent
Al-Shabab’s claim that it carried out Saturday’s deadly attack will have come as no surprise to those in the region. Ever since Kenyan forces went into Somalia in 2011 to push the militant al-Qaeda-linked group back from their common border, al-Shabab has threatened to step up its attacks inside Kenya.
Since then, it has carried out sporadic gun, bomb and grenade attacks on churches, security forces and other targets, but nothing on this scale.
The Westgate attack bears similarities to the Mumbai siege of 2008 where heavily armed jihadist gunmen attacked “soft” (undefended) city targets, killing as many civilians as possible, taking hostages where they could, and taking maximum advantage of the surrounding publicity.
That prompted a complete rethink in counter-terrorism in Britain, with the realisation that the UK was unprepared at the time for such a determined attack.
On its Twitter feed, al-Shabab said it was behind what it called the “Westgate spectacle”.
In his TV address, Mr Kenyatta said security forces were “in the process of neutralising the attackers and securing the mall”.
He went on: “We shall hunt down the perpetrators wherever they run to. We shall get to them and we shall punish them for this heinous crime.”
He said he had “personally lost family members in the Westgate attack”.
TrappedThe attackers entered the Westgate centre at about 12:00 local time (09:00 GMT), throwing grenades and firing automatic weapons.
Dozens of shoppers fled; many were trapped inside. Officers have been going from shop to shop to secure the area.
Some seven hours after the assault began, al-Shabab said on Twitter that its fighters were still battling Kenyan security forces inside the Westgate centre.
A security source told the AFP news agency police and soldiers had finally “pinned down” the gunmen in one corner of the shopping centre after several hours of fighting.
One gunman was arrested and died of his wounds, Kenyan officials told the BBC. Four other gunmen were arrested.
Al-Shabab has claimed on its Twitter account that the Kenyan government wants to negotiate an end to the Westgate attack, but officials have told the BBC they intend to hunt the gunmen down. 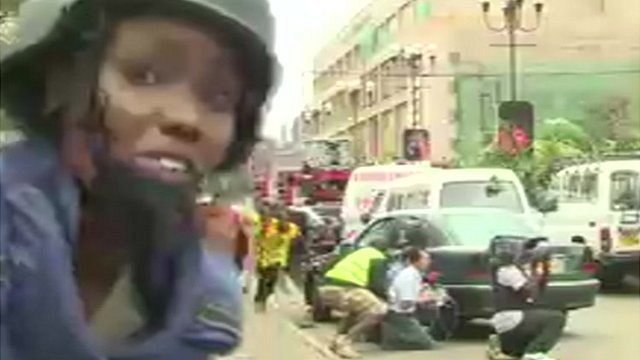 The BBC’s Anne Soy is ordered to lie down, as military vehicles move in
Some witnesses said the gunmen had told Muslims to leave and said non-Muslims would be targeted.
“They came and said: ‘If you are Muslim, stand up. We’ve come to rescue you,” said Elijah Lamau.
He said the Muslims left with their hands up, and then the gunmen shot two people.
The correspondent in Nairobi for the Economist, Daniel Howden told the BBC he spoke to one man with a Christian first name but a Muslim-sounding surname who managed to escape the attackers by putting his thumb over his first name on his ID.
However, the man told Mr Howden that an Indian man standing next to him who was asked for the name of the Prophet Muhammad’s mother was shot dead when he was unable to answer.
The BBC’s Mark Doyle, who is embedded with the African Union (AU) mission in Somalia, says the AU troops attack al-Shabab where they can.
Al-Shabab says the AU forces are invaders stopping their legitimate vision of creating an Islamic state and respond by mounting hit-and-run attacks, our correspondent says.
British Foreign Secretary William Hague said there would “undoubtedly” be British nationals caught up in Saturday’s events.
He confirmed that the UK government’s emergency committee Cobra met on Saturday afternoon.
The US State Department says it has reports that American citizens were injured in what it called “a senseless act of violence”.
This is one of the worst incidents in Kenya since the attack on the US embassy in August 1998. 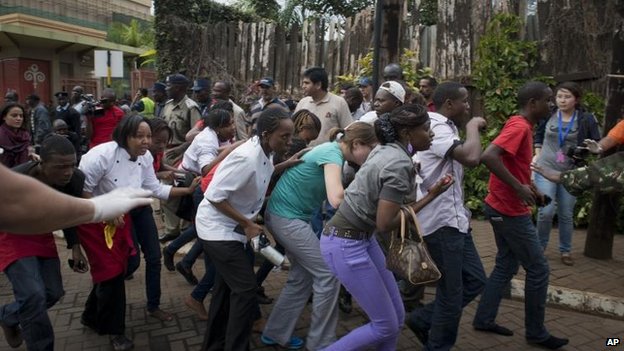 Dozens of civilians were inside the Westgate centre when the gun battle began. Many managed to flee, but some were trapped. 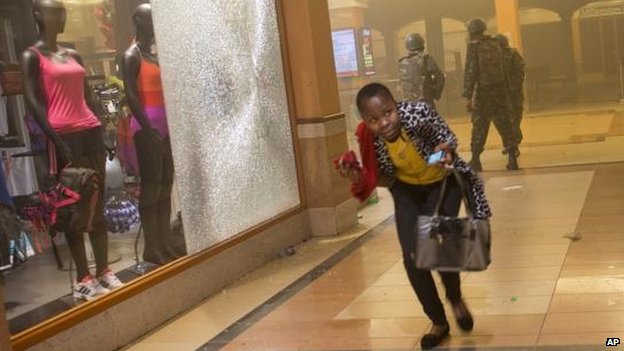 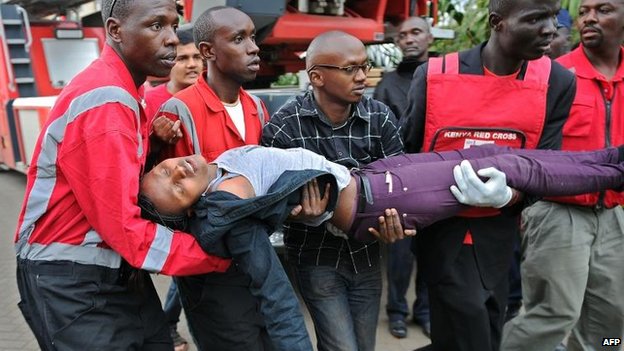 This woman who had been held by the gunmen was carried out of the building in a state of shock by the
Posted by Oromo firee speech at 6:24 PM