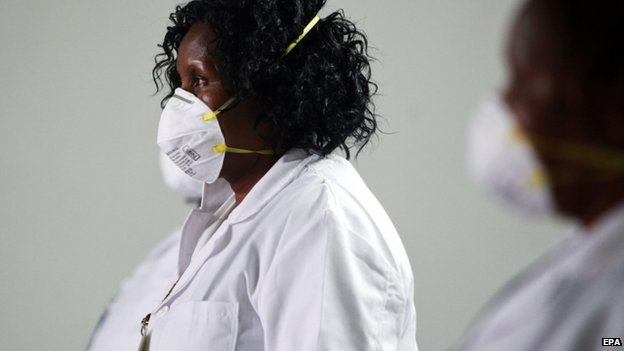 Kenya, as a major transport hub in Africa, is on high alert to prevent the spread of the deadly virus

The risk of transmission of Ebola during air travel remains low, says the World Health Organization (WHO).

Unlike infections such as influenza, Ebola was not airborne, it said.

As a consequence, Kenya Airways has rejected pressure to suspend its flights to the Ebola-hit states of West Africa where more than 1,000 people have died of the virus this year.

The BBC's Ishaq Khalid in Nigeria says text messages began circulating in Nigeria towards the end of last week recommending that people drink and bath in a salt solution as a way to stop getting the virus, for which there is no cure or vaccine. 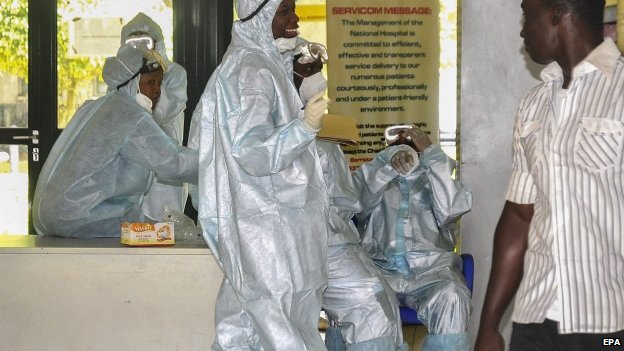 Despite the health minister scotching the rumour, many people have been admitted into hospital after drinking salt water.

Dr Joseph Lumba, the director of public health in the central Nigerian state of Benue, told the BBC that two patients had died in Makurdi city hospital on Wednesday.

But he also said such admissions were now lower following an intensive public campaign to dispel the salt myth.

A fourth Ebola death has been now been recorded in Nigeria, Africa's most populous nation.

An official at Nigeria's National Disease Control Centre told the BBC the victim was another nurse who had come into contact with Liberian government employee Patrick Sawyer, who brought the disease to the city of Lagos in July.

Ebola is transmitted by direct contact with the body fluids of a person who is infected. Initial flu-like symptoms can lead to external haemorrhaging from areas such as eyes and gums, and internal bleeding which can lead to organ failure.
'Too sick to travel'
On Wednesday, a WHO official had said that Kenya had been classified as a "high-risk" country for the spread of the deadly Ebola virus because the East African nation was a major transport hub, with many flights from West Africa.

But on Thursday, Dr Isabelle Nuttall, director of WHO global capacity alert and response, said the agency was advising against trade or travel bans to and from affected countries.
Posted by Oromo firee speech at 3:28 PM