Oromo media outlets, OMN and Radio Afuura Biyyaa, have confirmed the release from prison of the Oromo political prisoner Ob. Bekele Gerba, who was the Deputy Chairman of the opposition Oromo Federalist Democratic Movement (OFDM) at the time of his arrest in August 2011. Ob. Bekele Gerba had been unjustly imprisoned for about three and half years. According to information we have received, his fellow prisoner Ob. Olbana Lelisa, the high-ranking leader in the Oromo People’s Congress party (OPC) at the time of his arrest with Ob. Bekele Gerba in August 2011, remains imprisoned unjustly.
Issues Ob. Bekele Gerba Imprisoned for Remain Unresolved …
BEKELE GERBA ON LAND-GRABBING AND ENVIRONMENTAL POLLUTION:
In 2010 – a year before his arrest, Ob. Bekele Gerba passionately debated during the General Election about land-grabbing, especially land-grabbing around Finfinne, and the appalling environmental pollution in Oromia and beyond (listen below); his firm stand on these issues had brought land-grabbing around Finfinne and environmental pollution to the forefront of the people’s consciousnesses at the time and since then.

BEKELE GERBA ON NATIONAL EQUALITY FOR OROMOS AND OTHER NATIONALITIES IN ETHIOPIA:
His firm stand on national equality has been also widely reported by the media (listen below); Ob. Bekele Gerba made the appeal for national equality for Oromos and other oppressed nationalities in Ethiopia as a political prisoner facing the Ethiopian government’s politically biased and motivated court in November 2012. 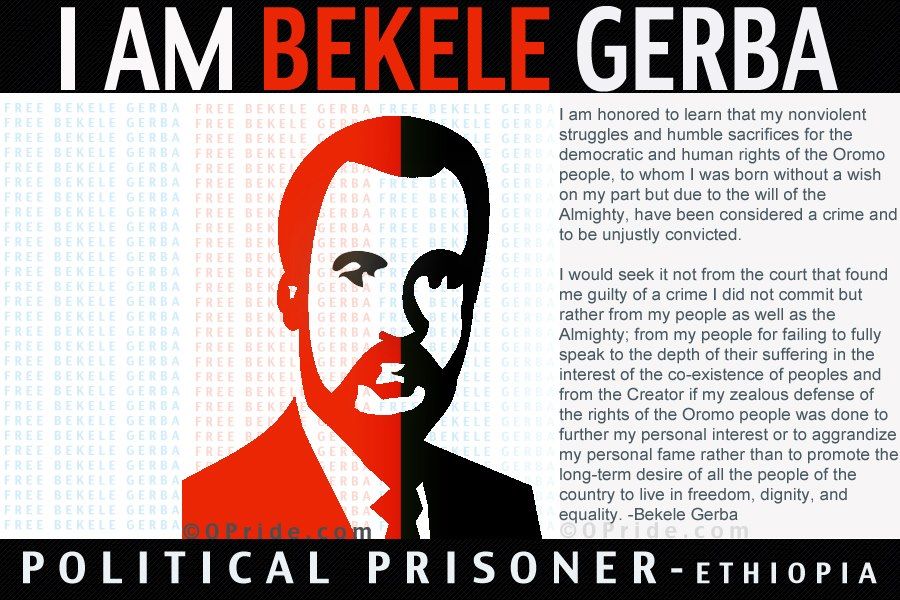 Posted by Oromo firee speech at 8:43 AM